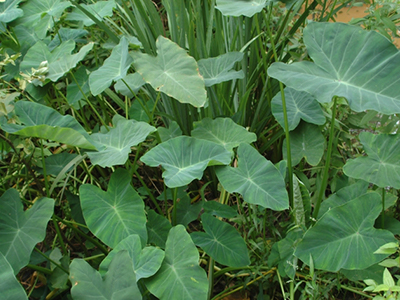 Originally from South Asia, wild taro (Colocasia esculenta) looks a little like true elephant ears (Xanthosoma sagittifolium) and the arrow arums (Peltrandra spp.), with leaves shaped like arrowheads that can grow up to two feet long on four-foot tall stems.

Unlike these other species, wild taro is considered an aggressive weed. It forms dense stands along river and lake shores, displacing native shoreline vegetation and disrupting the habitat of Florida animals.

Don’t purchase wild taro from a nursery. If it’s already in your landscape, remove it before it has a chance to spread any further. If you’re not sure whether a plant is wild taro, take a sample to your county Extension office for identification.