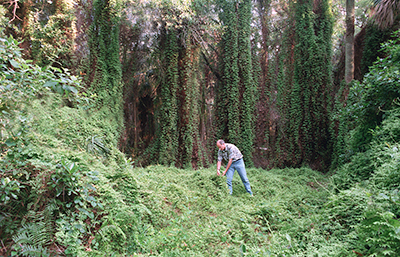 Parts of Florida are under attack, not by an army of soldiers but by invasive plants like the Old World climbing fern, which now covers an estimated 300,000 acres of natural areas in central and south Florida.

Old World climbing fern has wiry fronds that twine their way to the tops of trees, smothering entire sections of forest. It can also make wildfires much worse by acting as a conduit for the flames.

This plant can be treated with herbicides, but eradication is especially difficult in isolated areas. In 2005, a defoliating moth was released in southeast Florida as a biocontrol, but failed to establish. Another species of defoliating moth, Neomusotima conspurcatalis, was released in 2008 and 2009, and has had more success. Other insects are currently being tested for biological control.

If you find Old World climbing fern on your own property, pull it up by the roots or spray it with glyphosate-containing herbicide. Dispose of the fern with your regular trash, and don't put it in compost piles, where it can spread.