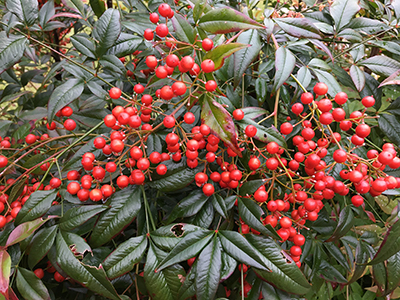 Nandina was originally introduced as an ornamental shrub for its attractive berries and foliage, but this invasive plant has spread into natural areas of the Southeast, displacing native plant populations.

Also called heavenly bamboo, nandina has a spreading form with bamboo-like stalks and delicate, ferny foliage in shades of green and red.

It is difficult to control, as even a piece of root left behind can grow into a new plant. Its red berries are eaten by birds and other animals, spreading the plant many miles away from where it originated. Nandina also spreads via underground stems.

It can grow to a height of ten feet and can displace native species. Nandina can be aggressive in the landscape and difficult to remove, so consider carefully before planting it.

If you really want to use nandina in the landscape, look for sterile cultivars that are either berry-free or produce berries that don’t germinate. Better yet, try a native holly that also produces cheerful red berries.