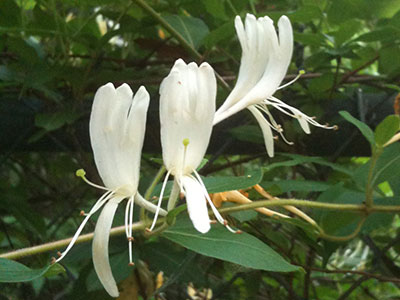 Japanese honeysuckle is a fast-growing vine with fragrant white flowers that’s frequently found in Florida landscapes. Imported years ago from Asia for use as an ornamental, it quickly spread into the wild, and is now considered invasive. In fact, it's banned in several states.

An established planting of honeysuckle is capable of engulfing small trees and shrubs, causing their collapse. It can also shade out many native species.

It's best to remove Japanese honeysuckle from your landscape, making sure to get all parts of the plant to prevent it from coming back.

Luckily, there are great alternatives for gardeners who want a similar vining plant. Coral honeysuckle, also known as trumpet honeysuckle, is a native plant that can be distinguished from the invasive honeysuckle by its flowers, which are orange or red instead of white. Star jasmine has fragrant blossoms as well.

Other replacements for Japanese honeysuckle include the trumpet creeper, cross vine, passion vine, and millettia.