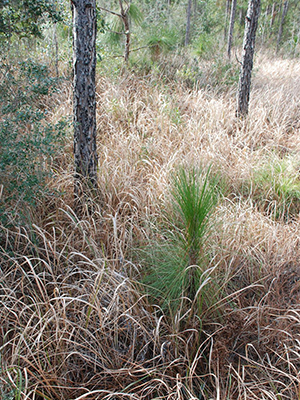 Listed as one of the world's ten worst weeds, cogongrass is an invasive perennial grass. In Florida alone, it has spread to more than a million acres. Cogongrass usually invades open areas like golf courses, roadsides, pastures, and natural areas where it displaces native plant species. It costs millions each year to control in Florida¹.

Floridians should recognize cogongrass in case it pops up on their own property. It grows in bunches that can reach six feet tall. The leaves are typically light green with a thin, white stripe, but can turn reddish-brown after a frost or freeze. In spring or summer, the plants produce fluffy white seed heads.

Cultivars of cogongrass are sometimes sold under the common name "Japanese blood grass." However, you shouldn't plant these cultivars since they can revert back to the aggressive form.