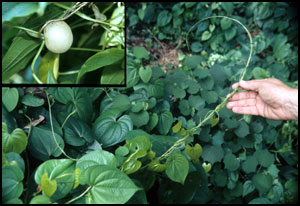 Invasive exotic plants hurt ecosystems by displacing native plants and animals. Many, such as air potato, have been introduced as landscape plants and have gotten out of control. It is now illegal to plant air potato, but the plant spreads quickly on its own.

Air potato (Dioscorea bulbifera) is a vigorously twining vine, which grows from an underground tuber. The stems can rapidly grow to 60 feet in length. Air potato leaves are heart-shaped and can be up to eight inches long.

The plant forms hundreds of bulbils that look like potatoes (hence the common name), that drop to the ground and sprout more plants. Bulbils are round and light brown, with small nubs on them, and can range from the size of a pea to five inches across.

If you think your landscape contains air potato, contact your county Extension office for information about getting rid of the plant. 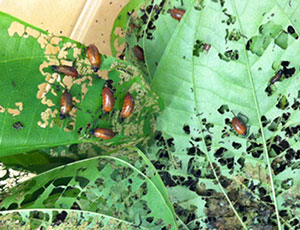 Additionally, larvae feed on and skeletonize plant leaves from the underside. While the larvae prefer the younger, tender leaves, they will consume older leaves. Larvae are also able to feed on the aerial bulbils of the air potato plants, these aerial bulbs are the primary means of propagation for the plants.  This feeding negatively affects the growth and reproduction of the plant.

The plant-specific feeding of this beetle was tested and verified by scientists at the USDA/ARS Invasive Plant Research Laboratory in Fort Lauderdale. Within three months of their release, extensive damage to air potato plants was observed at the initial release sites. While the long-term impact of these beetles has not been determined, the initial results of their release are promising.

Think you've seen an air potato leaf beetle? Snap a photo and send it in for identification along with information on where you spotted the beetle (GPS coordinates are preferred) to Paul.Pratt@ars.usda.gov. The information will be added to a locality map.