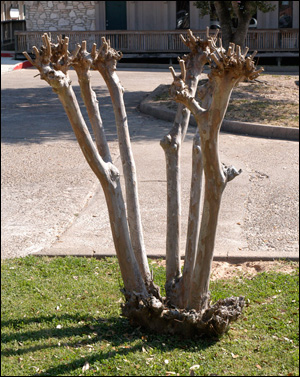 Don't try this at home: an example of "crape murder"

The crapemyrtle is a versatile, drought-tolerant plant that produces dazzling blooms all summer long. During the winter months, the crapemyrtle is a living sculpture, adding form and texture to the landscape. Late winter is the optimal time to prune crapemyrtles. It's important that you know how to prune correctly so that you can avoid topping—a practice is commonly known as "crape murder."

How to Prune Crapemyrtle

To properly prune crapemyrtles, use the following techniques.

Unfortunately, many homeowners and landscape professionals prune crapemyrtle trees too severely (see an example of this in the photograph). Topping—commonly called "crape murder"—can be very damaging to the tree. This practice results in a "witch's broom" appearance and a tree that is no longer in proportion. Although topping may result in larger blooms, the flowers will grow on thinner, weaker branches that will droop, especially after rain, and may even break. Topping can also shorten the life of your tree.

If you want to rehabilitate a "murdered" crapemyrtle, try one of the following options:

Spread the word among your friends and neighbors to help eliminate crape murder. Use proper pruning techniques on your own trees, or ask your yard maintenance professionals about their pruning techniques. Remember to choose an appropriately sized plant for your site and prune sparingly to maintain beautiful crapemyrtles in your yard.