Yellow jackets are an important predator of many damaging landscape pests; however, this landscape service they perform is not enough to endear them to most people. Their ability to sting multiple times coupled with their aggressively defensive nature makes them one of those insects that people understandably want nowhere near their homes. 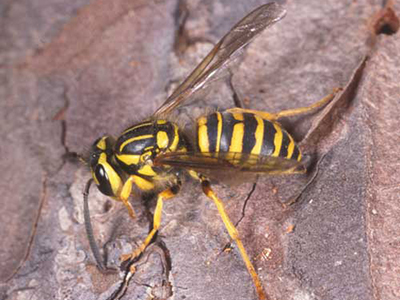 The commonly called baldfaced hornet (Dolichovespula maculata) is actually another species of yellow jacket. It's distinguishable by its black and white coloring and aerial nests. The baldfaced hornet's common name comes from its hornet-like size and nesting habit—generally "hornet" is used for species with nests above ground while "yellow jacket" is used for species that create underground nests.

Yellow jacket colonies die off in the winter with the exception of queens, who will have mated in the fall and then overwinter as an adult. In the spring, queens create a new colony. You may discover a nest when you notice a few yellow jackets flying low to the ground, with individuals going underground and coming up from below. The less lucky way to discover a nest is to run it over with your lawnmower, likely angering at least a few inhabitants.

If you notice that yellow jackets have decided to create a home for themselves a little too close for comfort, the safest option is to hire a professional pest control operator to eliminate the colony. Be aware that while nests are largely inactive at night, any disturbance will result in instant activity by the yellow jackets. One of the reasons an angry nest of yellow jackets is so dangerous is that, unlike honeybees who die after a single sting, yellow jackets can continue to sting their target. And even if one yellow jacket is hurt, it releases an "alarm pheromone," drawing aggressive and defensive behavior from the whole colony.

You may also find yellow jackets while enjoying a picnic. These stinging insects are attracted to sugar sources such as berries and flower nectars, as well as soft drinks, watermelons, and other ripe fruits. When drawn to your picnic yellow jackets are not as aggressive; they are in search of their own food, not defending their home.

While yellow jackets do perform an important ecological role as predators of landscape pests, it's understandable that people do not want to live or play near a colony. If you find a nest on your property, again, it's best to contact a professional.

Editor's Note: You'll notice a discrepancy in the spelling of "yellow jacket;" there's no firm agreement. Our specialist uses two words, but in publication titles that use one word, we've left the spelling as is.