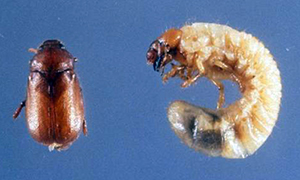 Chafer beetles are sporadically a problem for turfgrass in Florida and some species can be very damaging in coastal areas.

Did you know that chafers are a group of scarab beetles? There are a bunch of different scarab beetles that can be turf pests; "white grub" is a general term for all scarab beetle larvae. These grubs feed on the roots of all turfgrass species and live at or just below the soil-thatch interface. All white grubs rest in a curled C-shape and are about ½ to 2 inches long; chafer grubs are on the small end of that range.

Initial, mild damage from the grubs will leave areas of turf yellow, which is a symptom that is hard to correctly diagnose. Major damage will result in large areas of dead turf; this kind of damage usually becomes noticeable in late summer to early fall, particularly when the turf is stressed, for example by drought.

If you suspect that white grubs may be munching away at your turfgrass you can check by cutting down about 2 inches into the turfgrass at the edge of an off-colored area. Cut around three sides of a 1-foot square piece of sod and then pull back the flap of sod you've cut free. If the turf is easily pulled away from the soil that means there are few to no roots on it. If there are grubs present on the uncovered soil surface, they are likely responsible for the lack of roots. You can also be on the lookout for adult chafer beetles flying at night near lights.

Once you have an idea of what pest you are dealing with, you can contact your county Extension office for information on treatments.