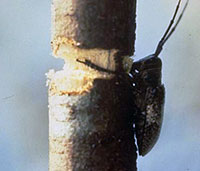 Twig girdlers (Oncideres cingulata) are beetles that can cause damage to the small branches of many hardwood trees. Adult twig girdlers are about 1/2" long and grayish-brown in color, often blending in with the bark of a tree, and have long antennae that are as long or longer than the beetle itself.

The female beetles chew a deep notch around pencil-sized branches and typically lay three to six eggs under the bark of the dying tip. The boring encircles the branch tip, hence the "girdler" name. The female beetles must girdle the twigs because the larvae cannot fully develop in green twigs with high moisture content.

Homeowners will probably notice dead branch tips on trees such as oak, hickory, pecan, and persimmon. Girdled limbs eventually break and fall to the ground, but the damage is usually not life threatening to healthy trees. Most girdled branches fall to the ground within a few weeks. Beetle larvae hatch in three to four weeks and will feed and grow within the branch until late next summer. These insects pupate in late August and early September after which the new adults emerge.

The best way to get rid of an infestation of twig girdlers is to gather any damaged branches in the fall or winter, making sure to get the severed branches and those still hanging or lodged in trees. Burning, burying in a moist location, or exposing the twigs in a hot, dry area are some of the options for destroying the larvae.

With information from John L. Foltz, UF/IFAS Department of Entomology and Nematology