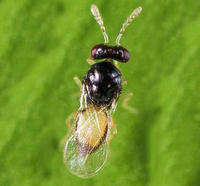 The Florida Department of Agriculture and Consumer Services Division of Plant Industry (FDACS-DPI) has developed a biological control program to release these wasps across Florida’s dooryard citrus plantings. Interested homeowners can sign up for the program at https://www.fdacs.gov/TRA.

There are some things to remember before releasing these parasitic wasps. Wasps should be released outside of any area of insecticidal spray. Additionally, wasps need to be released where psyllid nymphs are found since this is the only stage of the Asian citrus psyllid’s life cycle the wasps attack. Finally, ants need to be controlled in areas where the wasps are being released. This can be done by simply applying a 2 cm wide barrier of sticky Tangelfoot or other non-insecticidal barrier at the trunk of your citrus tree. This is an important step as the presence of ants can decrease the effectiveness of wasp biological control by 85 percent!