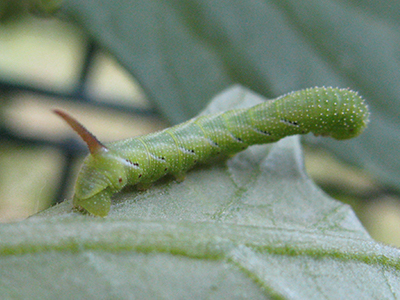 If you're growing tomatoes, keep an eye out for hornworm caterpillars. These hungry pests can grow up to four inches long and will defoliate your tomatoes in just a few days.

Both tobacco and tomato hornworms have light green bodies with diagonal white markings along their sides, and a small horn at the back of their bodies. The former has seven diagonal lines and a red horn while the latter has eight V-shaped markings and a black horn.

The adults of both species are large moths, part of the Sphingidae family. The moths in this family are called hawkmoths, and the caterpillars are often referred to as hornworms, due to the horn-shaped protuberance found on their posterior end.

It's easy to overlook young caterpillars, since they're small and blend in well. It's easier to spot signs of damage like bare stems or caterpillar droppings.

Look carefully for these pests, and be sure to check the undersides of leaves. Use the "pick and squash" method to get rid of any that you find, or use a biorational insecticide like Bt.

The name "Bt" is actually an abbreviation for a bacterium called Bacillus thuringiensis that's found in soil and acts as a natural insecticide.

Bt works by interfering with the digestive systems of caterpillars, causing them to stop eating and then die. Although Bt is poisonous for caterpillars, it's safe for animals, humans, and the environment.

Different strains of Bt control different insect larvae. Look for the type that targets caterpillars that feed on vegetables, trees, and shrubs, often sold under the brand names Dipel and Thuricide. You may need to apply Bt more than once to fully eliminate pest populations.