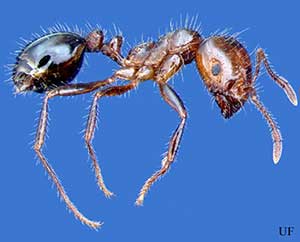 There are several species of fire ants in Florida. The most notorious is the red imported fire ant. It is known for its painful, burning stings that result in pustules and intense itching. Native to South America, these fire ants are considered an invasive species in the United States. They are aggressive, reddish brown to black, and from one-eighth to one-quarter of an inch long.

The effects of a fire ant sting can last up to 10 days and even become infected if broken open. Additionally, some people have allergic reactions to fire ant stings, which can be severe.

Red imported fire ants can build large nests, usually in the form of visible dirt mounds. Because of the sandy soils in Florida, fire ants may not create the sizable mounds you might find in states with more clay-based soils. This species of fire ant is more prevalent in well-manicured landscapes, but also can inhabit areas around trees and stumps, as well as spaces under pavement, buildings, and indoor areas. Fire ants have even been known to live inside electrical equipment and utility housings which can result in short circuits. When their nests are disturbed, many fire ants will quickly run out and attack any intruder.

Fire ants are omnivorous feeders. They will eat carbohydrates, like fruits and sugars, and proteins like insects and meat. This ant also feeds on grease and oil more than other ants which is why fire ant baits are often oil-based. Oil-based baits are dominated by fire ants which results in native, non-pest ant species being outcompeted for this perceived resource.

Workers will forage for food more than 100 feet from the nest. They can forage during both the day and the night, generally when air temperatures are between 70° and 90°F. When a large food source is found, the ants recruit other workers to help take the food back to the colony.

Because of their aggressive nature and painful sting, they have been the target of numerous methods of control. Some of these methods are not effective, such as using club soda, grits, soap or wood ashes, shoveling mounds together, and spraying foraging workers. Only about 20% of the colony is foraging at a given time. Thus, spraying is ineffective and unnecessarily adds pesticides to the environment.

There are unfortunately no control methods that will permanently eliminate fire ants from an area. Using a combination of broadcast bait applications and individual mound treatments with baits can help in controlling these pests. Spot-treatments to prevent foraging ants from entering structures can be done, although they do not solve the underlying cause. Excluding ants from structures by ensuring that doors and windows seal tightly and appropriate sealants are used at the point of entry to ants is also helpful.

Remember that the timing of your control is as important as the treatment you are using. Comprehensive fire ant management information can be found in the Extension publication, Managing Imported Fire Ants in Urban Areas.

In their native range, fire ants are considered just another ant. It is believed that their populations are lower because natural enemies suppress fire ants. Biological control agents can be pathogens, parasites, and predators. One of the best biological control agents for fire ants is other native, non-pest ants, so it is important to use control methods that will not kill all ants. Another interesting biological control agent is the phorid fly. Phorid flies are a fire ant parasite that has been released by the USDA to help control fire ant colonies in the southeastern US. Six species of phorid fly that are specifically parasitic on fire ants have been released and established. Three phorid fly species have become widely established and have expanded beyond the sites where they were released. Beyond phorid flies, research continues to look at other methods of biological control, such as using fungi and viruses.

As of yet, there is not a permanent solution to controlling fire ants. Once removed from an area they can quickly re-infest. For help determining which method of fire ant control is best for your area, contact your county Extension office.