The eastern lubber grasshopper is a large and destructive garden pest. Lubbers are one of the few grasshopper species that occur in such significant numbers that they can cause significant damage to citrus and vegetable crops as well as ornamental landscape plants. 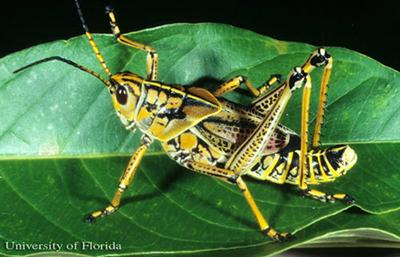 In the scientific name, Romalea microptera, "microptera" refers to the short wings the adults have which make the grasshoppers incapable of flying. In the common name, the word “lubber” is derived from the old English word “lobre” which means lazy or clumsy—a great word to describe this slow-moving grasshopper.

The colorful adults are one of the most distinctive grasshopper species found in the southeastern United States. While their coloring can vary, generally adult eastern lubbers are mostly yellow or tawny with black accents. Adults with darker colors can also be found, with yellow only a minor component. In northern Florida, a predominantly black form is sometimes found. While there can be a bit of variation in coloring, these are indeed all the same species.

Adults get large, from males starting out at around 1 ¾ inches long to females, which can get up to 3 ½ inches long! Generally speaking though, males are about 2 inches long and females are generally 3 inches. These clumsy grasshoppers are mostly observed walking since they aren’t great at leaping. But they are good climbers and can be found crawling up trees to feed on tender young foliage at the tips of branches.

There is one generation per year of these long-lived grasshoppers. Either nymphs (immature grasshoppers) or adults are actually present throughout most of the year in the southern portions of Florida. In northern Florida and along the Gulf Coast they can be found beginning in March or April to about October or November, with peak numbers in July and August. Female grasshoppers lay clusters of 30 to 50 eggs underneath the soil surface. Eggs need a period of cooler temperatures to mature and will hatch when temperatures begin to rise in the spring. The nymphs can often be seen in large numbers as they tend to emerge at the same time.

Lubbers in Your Landscape 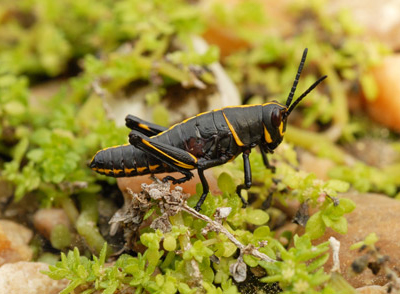 Lubber grasshoppers are destructive defoliators; they consume the leaf tissue of numerous plant species. Their voracious eating has been known to completely strip the foliage from plants, devastating whole gardens. More commonly though, lubber grasshoppers will eat irregular holes in vegetation and then move to another leaf or plant.

Eastern lubber grasshoppers have a broad host range, at least 100 species of plants from 38 plant families, including shrubs, herbs, broadleaf weeds, and grasses.

Despite this ability to eat from a number of plants, they do have preferences. As far as vegetables are concerned, peas, lettuce, kale, beans, and cabbage are relative favorites of lubbers, while eggplant, tomato, pepper, celery, okra, fennel, and sweet corn are less preferred.

Management tends to rely on capturing and physically removing grasshoppers from your yard. However, physical removal can be difficult when grasshoppers are abundant in your garden. If you have too many to pick by hand, you can spray an insecticide—just be sure to read the label before spraying. It's important to spray early when grasshoppers are young; as they mature they become more resistant to insecticides. Also, it can be helpful to keep vegetation mowed to the appropriate height, as short vegetation is less supportive of grasshoppers.