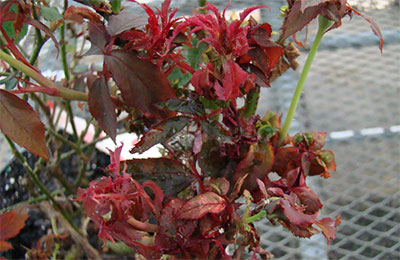 Symptoms of RRV include small twisted leaves and unusual reddening of foliage.

A new rose virus has been confirmed in Florida. Rose rosette virus (RRV) has infected Knock Out® roses in three counties in Florida (Alachua, Gadsden, and Levy).

Severe thorn proliferation and rapid elongation of branches are characteristic to RRV. Multiple stems also may be produced at the ends of branches with small twisted leaves, resulting in a “witches’ broom” appearance.

Other symptoms include unusual reddening of the leaves that persists even with age, unusual leaf shape, leaves developing from flower bud tissue, dying branches, and severe yellowing and stunting of the plant.

Plants infected with RRV usually die within one to two years.

RRV is spread by a tiny eriophyid mite, so small that it cannot be seen without magnification. Notably, this mite is not known to be present in Florida. Also worth noting is that all the infected roses in Florida belonged to the Knock Out® series, the most widely sold rose in North America. 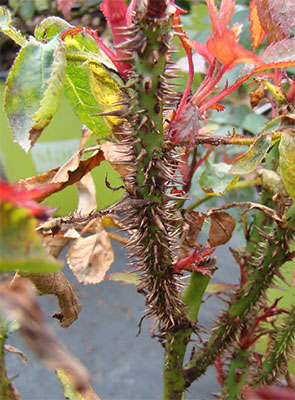 Routine scouting and early identification are key. There is no cure for RRV so infected plants must be destroyed. Since the eriophyid mite is not known to be present in Florida, mite management recommendations are considered protective in nature.

Confirming the disease is difficult, as it is often confused with other ailments, such as herbicide damage. If you think your roses might be infected, send close-up pictures to paret@ufl.edu. If a sample is needed for diagnosis, you will be notified after your photos have been reviewed.