The following is an abbreviated update on lethal bronzing disease (LBD). A more complete report is available through AskIFAS.

From Jacksonville to the Keys, a new disease is threatening Florida's palm population. Lethal bronzing disease (LBD) was first encountered in Hillsborough County in 2006. Since then it has spread to more than 30 of Florida's 67 counties.

Lethal bronzing disease was originally found in the Phoenix palm genus (date and Canary Island palms) in Texas; for this reason it was initially named Texas Phoenix Palm Decline. Today researchers report it from more than a dozen host species. The current list of species affected also includes queen, cabbage, pindo, and coconut palms. While there is no cure for this deadly plant disease, there is plenty you can do to identify and prevent the spread of lethal bronzing in your area.

What is Lethal Bronzing (LBD)? 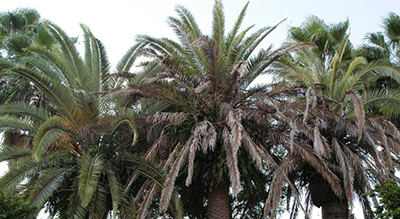 The Canary Island palms (Phoenix canariensis) in the center and on the right have more dead leaves than would be normal, a symptom of LBD. The palm on the left is healthy. Credit: Monica Elliott, Symptoms of Palm Diseases and Disorders, USDA APHIS PPQ, Bugwood.org

Lethal bronzing is an infection that causes palms to decline quickly. It is an untreatable and fatal disease; once a palm is infected, there is no cure.

Lethal bronzing is caused by a phytoplasma, a unique type of bacteria. Because this bacteria lacks a cell wall it is difficult to culture in a lab and thus difficult to study. It is a close relative to the strain that causes lethal yellowing in palms.

How Does LBD Spread?

The bacteria that cause LBD live in the palm's phloem, the plant tissue that transports sap. Piercing-sucking insects (the palm cixiid, Haplaxius crudus) feed on sap and then carry the infection. The insects act as a vector, spreading the pathogen from palm to palm.

The good news for gardeners is that the LBD pathogen cannot survive outside of a living host. This means it cannot be spread mechanically, on pruning tools, for example.

What are the Symptoms of LBD? 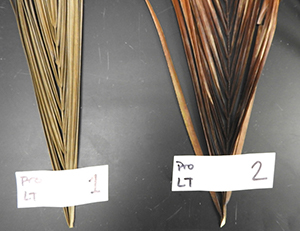 (Right) A reddish-bronze leaf is a symptom of lethal bronzing. (Left) A grayish leaf is evidence of normal leaf deterioration. Credit: UF/IFAS

The first symptoms of LBD are early fruit drop or flower blackening (necrosis). If flowers or fruit are not present, it can be difficult to notice this disease in its earliest stage.

Leaf discoloration is the next recognizable symptom. Beginning with the oldest leaves, and progressing upward, the foliage turns a bronze-like brown and dries. This symptom is called bronzing. The palm's decline will continue until the top-most leaf, also called the spear leaf, turns brown. This final stage signals the death of the palm's apical meristem, or "heart."

The earliest symptoms are generally observable four to five months after infection. The time between the first sign of symptoms and the palm's death varies between palm species. Usually it is short, about two to three months.

This disease progresses rapidly. Gardeners must act quickly to save neighboring palms.

What Should I Do If I Suspect My Palm Has LBD?

If your palms (or neighboring palms) show symptoms of decline, contact your county Extension office. A test can detect the LBD pathogen and determined if the palm is indeed infected. If the test is positive, the palm should be removed immediately. Neighboring palms should also be tested.

If a neighboring palm tests negative, it can receive repeated preventative doses of an antibiotic, oxytetracycline HCl. This protects the palm from LBD and protects your investment in your landscape.

Unfortunately, once a palm is infected, it is usually too late for the antibiotic to save it. Even palms that are not yet showing symptoms of LBD should be removed. Only quick action can minimize the spread of this devastating pathogen. 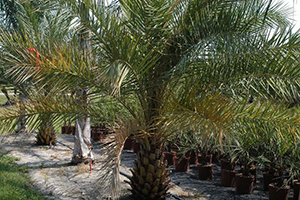 An infected wild date palm (Phoenix sylvestris) with one bronzed leaf and three other older leaves in a brief yellowing period that will be followed by leaf death. Credit: Monica Elliott, Symptoms of Palm Diseases and Disorders, USDA APHIS PPQ, Bugwood.org

If you suspect a palm has lethal bronzing disease, please contact your county Extension office immediately. UF/IFAS is here to help.