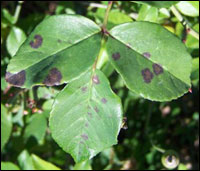 The fungus Diplocarpon rosae produces black spots of about 2-12 mm in diameter, usually on the upper surface of the leaf (the spots don't show up the lower surface, or underside, of the leaf). Often, the spots have irregular, feathery borders, and sometimes yellowing may appear around the lesions. While leaves are the most susceptible, spots may be found on other parts of plant as well. Black spot is a fungal disease that can cause severe defoliation of affected rose plants. Considered the most serious disease of roses in Florida, black spot affects nearly all rose cultivars worldwide. It is a frequent problem for roses grown outdoors and reduces the quality and life span of the plants. 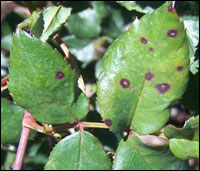 Caused by the fungus Cercospora rosicola, Cercospora leaf spot also causes severe leaf loss in heavily infected plants. Symptoms are circular spots, usually 2-4 mm in diameter, but some can be as large as 10 mm in diameter. The size is variable depending on the species or variety of rose on which the lesions occur. When symptoms begin to appear, a small purplish area becomes apparent. As the disease progresses, the spot will grow larger, the center of the spots turning tan to almost gray, as the infected part of the leaf begins to die. Lesions are primarily found on leaves but can also be found on other parts of the plant.

Luckily, because both diseases are caused by fungi, Cercospora leaf spot's impact is reduced when control measures for black spot and powdery mildew are used. Fungal sprays are available, and sanitation plays an important role in prevention. Remove dead and diseased leaves that have fallen by raking, and use mulch to create a physical barrier between the plant and fungal spores on the ground. Drip irrigation keeps the foliage dry and less susceptible to fungal infection.