Bacteria are another type of organism that can infect plants. As a group, bacteria are very diverse and include both beneficial and pathogenic species.

Approximately 170 species of bacteria are known to cause disease in houseplants. Although bacteria themselves are microscopic and cannot be seen with the naked eye, plants infected with bacteria will often show visible signs.

Bacteria grow between plant cells as opposed to inside host cells, like viruses do. As a result, the way that they cause disease and the symptoms that they trigger are quite varied. Some bacteria produce toxins or inject proteins that cause plant cells to die. Others produce enzymes that break down plant cell walls. Another type of bacteria moves in the xylem vessels, causing the plant to wilt and die. Bacteria like Agrobacterium can even create cancer-like growths by genetically modifying host cells and triggering overgrowth. 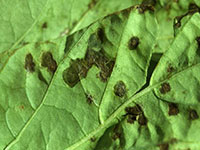 Bacteria are mostly dependent on outside agents to get them from plant to plant. They can be transported by birds and insects, splashing water, windborne rain, soil transferred from an infected area to a previously uninfected area, or by gardeners who touch an infected tool with their hands or pruning tools and then touch a healthy plant. Some bacteria can survive for a time in decaying plant matter in the soil, but most need a host to survive. Bacteria infect plants through wounds caused by insects or pruning or through natural openings in plant leaves or stems called stomata.

A number of species of bacteria can cause plant disease. For example, Pseudomonas cichorii causes bacterial leaf spot on pothos and aglaonema, and Candidatus Liberibacter spp. causes citrus greening (also known as Huanglongbing).

Phytoplasmas are the cause of lethal yellowing in palms, a disease that affects at least 36 species with coconut palms being the most widely affected. The phytoplasmas are spread mainly by leafhopper and planthopper insects that feed on the phloem tissues of infected plants.

Antibiotics like tetracycline can inhibit phytoplasma growth but will not stop the disease progression unless the antibiotic is continually administered. The disease is best controlled by breeding and planting resistant plant varieties. Phytoplasmas also cause Texas Phoenix decline in palms, which has similar symptoms as lethal yellowing. It affects palms in the Phoenix genus, including Canary Island date palm, and more recently our state tree, Sabal palmetto. (Read our article about Sabal Palm Disease.)