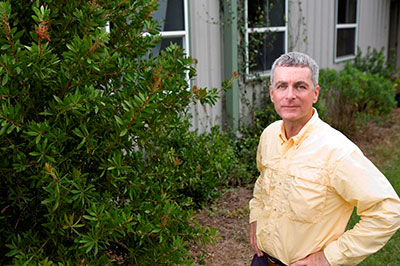 GAINESVILLE, Fla. — Good news for your utility bills and the environment: New University of Florida research shows that landscape shrubs need much less water to establish healthy roots than you might expect.

"We finally have our irrigation recommendations for establishing shrubs backed up with science. We need less irrigation than many people think," said Ed Gilman, a UF Institute of Food and Agricultural Sciences environmental horticulture professor who led the research study.

The six-year study's objective was to determine how best to irrigate shrubs during "establishment"—the 20- to 28-week period when shrubs' roots grow until the plant can survive without irrigation.

The research examined irrigation frequency and volume on the quality, survival and growth rates of three-gallon, container-grown shrubs. Plants were examined in Fort Lauderdale, Balm, Apopka and Citra, locations that span three water management districts in Florida and have varied growing conditions.

Some of the state's most popular ornamental shrubs were evaluated, including both native and non-native species, such as yaupon holly and gardenia.

"One of the results that we noted was that there are no differences between native and non-native species for amount of water required for establishment, "Gilman said. "This often surprises people, but it emphasizes that the Florida-friendly principle—right plant, right place—is worth following."

Florida-friendly gardening means planting that accounts for site conditions, maintenance needs and local climate. Such landscapes may use both native and non-native plants, as long as the non-native plants aren't an invasive species.

Regular irrigation in the months after planting helps shrubs remain healthy and attractive as they establish. But one eyebrow-raising study finding is that light, frequent watering is much more efficient and effective than applying large volumes less frequently.

North of Orlando, Gilman recommends using as little as 1 gallon of water per shrub, applied every eight days. In South Florida, he recommends every four days.

More frequent irrigation, such as every four days in North Florida and every two days in South Florida, does result in more vigorous plant growth. But applying more than 1 gallon per irrigation doesn't increase survival or growth, he said.

"Results showed that applying large volumes of water cannot compensate for infrequent irrigation," Gilman said. "This means that you should water more often, but with less water at each irrigation event. That helps the plants achieve proper establishment and, in turn, means less watering in the long run."

Gardeners should maintain their irrigation schedule until shrubs survive on rainfall alone, once roots have grown to the edge of the foliage canopy, usually within 28 weeks of planting.

In long hot, dry spells, occasional irrigation may be needed after shrubs are established. Such weather can occur at any time in Florida, but is most likely in the spring and fall—April, May, October and sometimes November.

In the first year after planting, use 1 to 2 gallons of water when there is less than a quarter inch of rain within a two-week period. Drought-sensitive shrubs, such as holly fern and wild coffee, may need more frequent supplemental irrigation, while drought-tolerant shrubs, like Burford holly, may need very little.

The study can be found at http://hort.ifas.ufl.edu/irrigation.