Every pursuit has its myths and legends; gardening is no different. Here are more of our favorite garden myths, along with the grains of truth that inspired them. 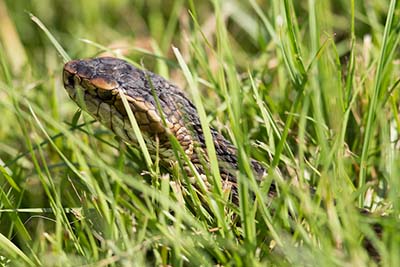 The sight of a snake in the landscape often sends gardeners into a panic. Obviously we don't suggest approaching unidentified wildlife, but even surprised snakes are rarely aggressive. Far from being a nuisance, snakes play an important ecological role in our Florida-Friendly yards.

The best way to protect yourself while gardening is to wear thick boots and gloves. Take care when working in areas that may serve as a hiding place for a snake. And while it's best to never approach any snake, approaching a venomous snake can be dangerous, even deadly. If you think a snake may be venomous, call a professional. The Florida Fish and Wildlife Conservation Commission has a list of professionals you can consult.

For more on garden snakes, invasive snake species, and the difference between "poisonous" and "venomous," take a look at our article Snakes in Florida.

Wouldn't it be lovely if it were true? Devices claiming to emit mole-repelling sonic vibrations seem like the perfect alternative to mole traps. Unfortunately these vibrating devices have not been found effective in scientific trials. In fact, UF/IFAS researchers point out that mole tunnels next to highways suggest that even the vibrations of heavy traffic don't deter moles.

It is true that the smell of mothballs is obnoxious to most creatures (gardeners included). It is not true that a dusting of mothballs will drive moles from your property. We're sorry to say that this treatment, too, has not been found effective in scientific trials. The moles may block off the treated tunnel, but they will happily dig a new one a few feet away. 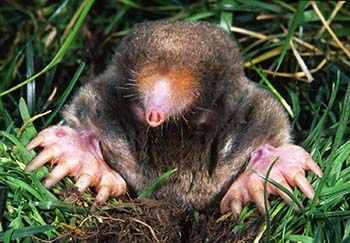 With vibrations and mothballs off the list of deterrents, gardeners have gotten desperate. Many people claim that putting sticks of fruit-flavored gum into moles' tunnels will eliminate the moles. We're not sure if they believe gum is toxic to moles or if the smell alone will do the trick. Regardless, this is another method not supported in scientific tests.

On that note, we're sorry to say that there are no methods of eliminating moles that do not endanger these furry creatures. We do have information on methods to deter and trap moles but most traps are lethal. The good news is that damage done by moles is usually cosmetic — no plants were (seriously) harmed in the making of those mole hills. Better still, moles eat insects, including pests like mole crickets, cutworms, and beetle larvae. True, some of mole tunnels disturb the roots of young plants and may dry out grass roots, but most plants recover quickly.

Moles are a just another sign of a thriving landscape ecosystem. Congratulations — you did your job well, gardener! Once you're ready to make your peace with moles, you can learn more about Scalopus aquaticus in this article from AskIFAS.

Franken-bug: created by mad scientists, now escaped and profiting only the auto-detailing industry. This final myth makes such a compelling story, doesn't it? We have no idea how the lovebug myth began, but it's been circulating at least since the 1970s. Alas, the truth in this case is less exciting than the fiction. 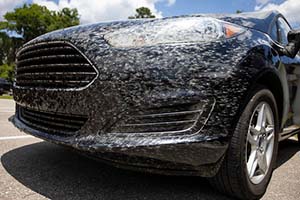 "Lovebugs" are actually flies, scientific name Plecia nearctica. They arrived in Florida via natural migration along the Gulf of Mexico. Dry years result in lower populations since lovebug larvae develop in wet areas. They need moisture and decaying vegetation to survive, but so do hundreds of other beneficial species. Removing this habitat might decrease your lovebug populations, but overall it would do more harm than good. There are no approved chemical controls for lovebugs, either.

Sorry gardeners; lovebugs are here to stay. Other than washing your car regularly to avoid etching, there isn't much you can do. You can, however, learn more (and debunk this myth whenever you hear it) by reading the Featured Creatures article on lovebugs.