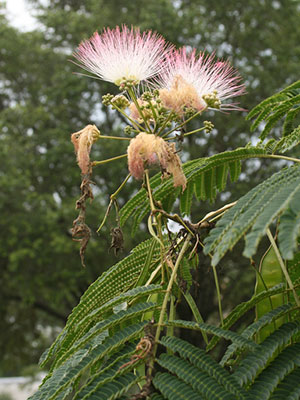 Commonly known as the mimosa tree or silk tree, Albizia julibrissin is an attractive yet invasive tree that is threatening Florida's landscape.

Originally from China, the mimosa tree has been a popular landscape tree in Florida for many years because of its fragrant pink flowers and feathery, fern-like foliage. The delicate, puffy flowers bloom from late April to early July.

While these trees started out as landscape plants, they have escaped cultivation and have moved into natural areas where they compete with native vegetation. Mimosa trees will grow in a variety of soil types and take advantage of sunny areas, growing up to twenty-five feet tall. Mimosas produce large amounts of seed pods containing five or more small brown seeds which typically persist on the plant though the winter. Seeds, which can remain dormant for years, are normally dispersed in close proximity to the parent plant; however, they can be spread by water or wildlife. They can become a serious problem along rivers, where their seeds can be easily transported.

Due to its ability to grow and reproduce along roadways and disturbed areas, and its tendency to readily establish after escaping from cultivation, mimosa is considered an invasive plant and not recommended for any use by the IFAS Assessment.

Another drawback is mimosa wilt—a disease that is becoming a problem across the county and is responsible for killing many roadside trees. Infected trees will start out with paling, drooping leaves on a single branch. As the disease progresses, leaves will turn yellow and fall off the tree. The same thing will happen with the rest of the branches on the tree until the tree dies, usually within a year of the symptoms first being observed. While this disease has helped reduce the number of mimosas in Florida, this tree is still not recommended for planting in the landscape.

The best way to get rid of a mimosa tree is to cut it down at ground level. Mimosas are able to re-sprout after being cut back so keep an eye out for new growth. To control resprouting, you’ll either have to cut off new growth or use a herbicide on the stump. Seedlings can be pulled by hand, but make sure you get all the roots. Learn how to recognize this tree and take action to prevent its spread. 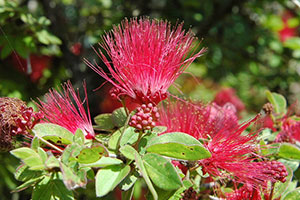 The flowers of the powderpuff tree look very similar to the mimosa's.

If you love the look of mimosa trees but want a non-invasive option, try planting sweet acacia or red bottlebrush. Sweet acacia, Acacia farnesiana, has a similar look to the invasive mimosas, sporting delicate foliage and yellow puffed flowers. Bottlebrush (Callistemon spp.) and dwarf powderpuff (Calliandra spp.) are two other plants that will give you delicate flowers that somewhat resemble those of the mimosa tree.