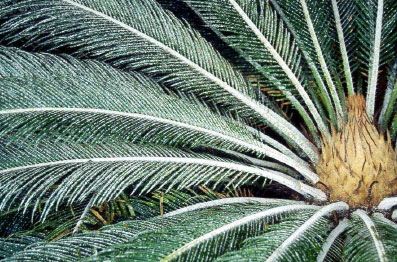 Sagos were once considered traditional Florida landscape plants, but their popularity has dwindled, thanks to a pest called cycad aulacaspis scale, or Asian cycad scale.

Aulacaspis yasumatsui is an armored scale that has been observed on many cycads in Florida from the Cycadaceae, Zamiaceae, and Standeriaceae families, although this scale seems to favor sagos.

Newly hatched scales, called crawlers, initially infest the trunk and base of the leaves. These crawlers will also infest the leaves, cones, seeds, and roots of cycads. The damage from these tiny sucking insects initially appears as yellow or bleached-looking spots, eventually making the leaves brown and crispy. Highly infested cycads are almost completely covered with a white crust that consists of living and dead insects.

Cycad aulacaspis scale seems to spread over short distances by wind, and long distances by the transport of infested plants. It can coat a sago within months and kill it within a year. The scale can even affect the roots down to two feet deep.

Cycad aulacaspis scale is a tough pest to get rid of, but repeated treatments with horticultural oils or an approved systemic insecticide may help. To manage this scale, wash your plant with a vigorous spray of water to remove any dead or living scales. Then apply a horticultural oil, like Organocide, SunSpray oil, or Ultra-Fine oil, over the entire plant weekly for one month.

If you have heavily infested plants, remove the leaves before treating. Carefully discard removed fronds with household trash, not yard trash. In the case of severe infestations you may need to treat the roots as well. Frequent oil treatments can result in an unsightly build-up of oil and dead scales, but this can be improved by occasionally hosing the plant off.

South and Central Florida have seen some decline in Asian cycad scale populations recently. In South Florida, two natural enemies of the scale were introduced in 1997-98: Cybocephalus nipponicus, a predaceous beetle, and Coccobius fulvus, a parasitic wasp. While they have contributed to a decrease in the population of the scale, neither insect is able to provide complete control.

Contact your county Extension office for more information on controlling Asian cycad scale. Another option is to consider an alternative plant. The Dioon genus of cycads are rarely attacked by this pest.